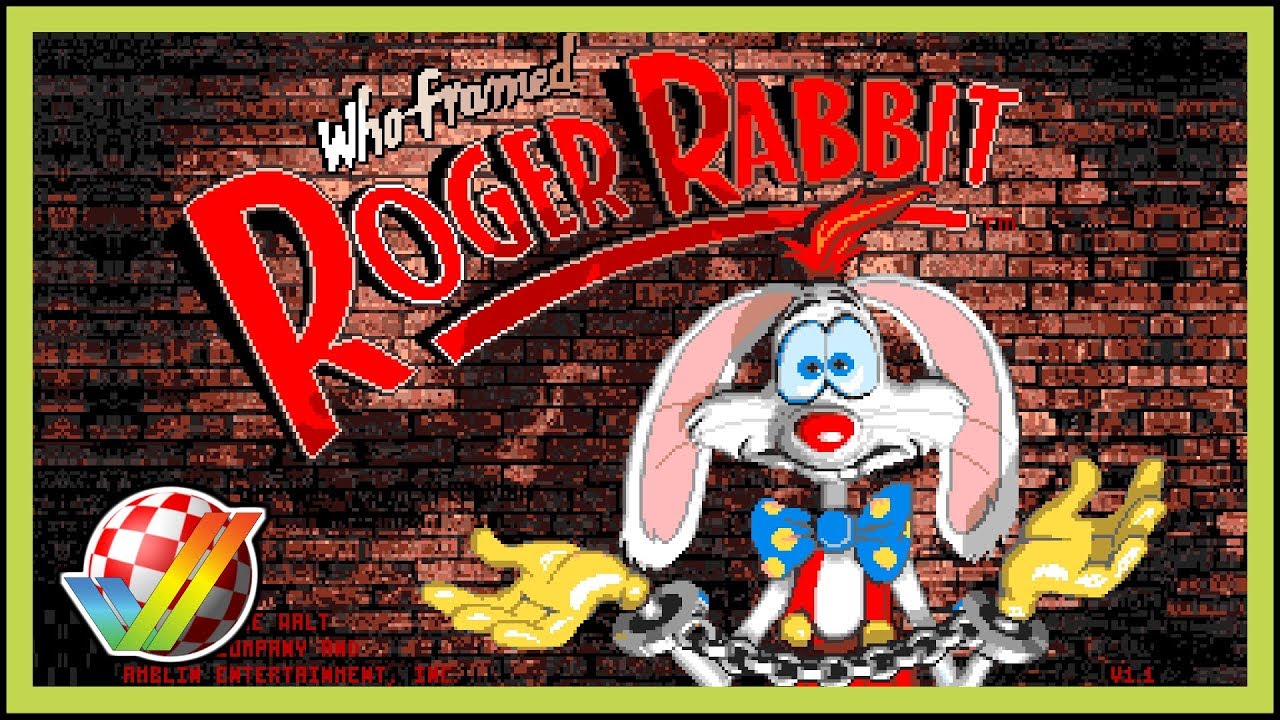 “Cartoon star, Roger Rabbit, has been framed for the murder of Marvin Acme. With the help of detective Eddie Valiant, they set out to prove Roger’s innocence. However, the evil Judge Doom and his gang of nasty weasels are out to stop them! With the help of Benny the Cab, Eddie and Roger whiz through the streets of L.A. and Toon Town and finally, a showdown with Doom.”

Finally a proper longplay of the Amiga version. The old one (10 years old, not by me) didn’t have an outro, wasn’t cropped right, had sound pitch errors because of wrong emulator settings, missed the voice part at 08:38, didn’t use Cycle-exact so the game ran a bit too fast, didn’t pick up a single glove or diamond on the driving levels (optional, I know) – only wheels (which looked like by accident), didn’t show all the different gags in the Gag Factory, had 100% stereo separation which makes 2 audio channels play in the left speaker/ear, and 2 in the right (super annoying if wearing headphones, like I always do). Should be 0% separation IMO as it’s much easier on the ears, thus sounds better. It also had unnecessary long loading times.

The manual says: “Use Benny’s accordion suspension system to rise above the cars and the Toon Patrol wagon”, but I can’t see what the point of this is. I first thought this meant I could drive past cars by driving over/through them, but that didn’t work on any car (or the Toon Patrol wagon), not over the DIP puddles either. This written manual was found on Amiga Lemon. Maybe it’s for another version of the game, or might work in 1.0 (I used 1.1), or I just did it wrong somehow?

The manual also says: “Complete the road as quickly as possible. The faster you finish, the more of a lead you will have on JUDGE DOOM in a race to race to the Gag Factory”, I hope this is true, otherwise I could have played around a bit showing when I land on a red buss – which the manual says this about: “Try landing on top of a RED CAR ‘THE BUSSES’ AND SEE WHAT HAPPENS!”, but nothing happens (even waited a while). It’s easy to land on them, but if you want to STAY on them without driving off, you have to jump up on a building first and hit an edge/wall up there so you stop, then drop down on the buss. Once again, maybe works for another version of this game?

Some other things the manual says about the driving parts are: “Watch out for bridges”, what bridges? It explains the rubber gloves, wheels and diamonds (yes, plural of diamond, but I only saw one, unless I missed one, but don’t think I did) and THEN tells us to keep an eye out for OTHER helpful items too. I never saw any other items.

Instead of doing an extras video this time, I included the different ways to fail, and driving into cars and stuff. This cut it close on the last level as I wanted to show all gags and kill all bad guys first. I didn’t include what happens when the music is over in the club, which is just the baby expression at 01:07 where he says “Jeez, Rog — that was pitiful. If you expect to save Toontown, you’d better get your act together and get to the Gag factory pronto!”. All that happens when the music is over is the game continues, no lives lost. So guess finishing this level as fast as possible (just like the driving one) gives you more of a lead on the final level. Which also explains why you don’t lose lives when he drinks either, it’s just something that takes up time.

Whenever I crash into a car, I move up or down instead of jumping over it, as it’s faster. At 07:06 there was a puddle above so had to jump this time. Good, so I could show that off as well.

The file-structure between 1.0 and 1.1 is quite different. The 1.1 takes about 35kb more and might contain more sound effects. What I noticed 1.0 has that 1.1 is missing is a loading screen between the levels/zones. The loading screen is the wall of bricks background in the beginning with huge white letters in the middle saying “LOADING ZONE”. Another difference is slow walking/running over the glue/paint on the last level (in 1.1). There were a couple more minor ones, but whatever. Maybe the reason the old longplay lacked the outro was 1.0 didn’t have it or didn’t work, thus why 1.1 was released. Or maybe it was just a bad crack, or caused by not using Cycle-exact. Don’t know.

It’s good to have a car behind you, that means no other car will come from the right (in the same lane), just some puddles.

08:02 – I had no way of getting this wheel. Wherever I jumped from to get it would just make me die when I land from either an impact or in the green stuff. I could have gone up on the roof dropped down that way, but that would just have wasted a bunch of time.

Diamonds = “removes a bucket of DIP from your tally” (extra life, sort of). Wheels = speed boost. Rubber gloves = can drive over the puddles/goo/sludge thingies.

Added the game over part at the end.